What is The Hobbit: An Unexpected Journey™ Strategy Battle Game?

The Hobbit: An Unexpected Journey™ Strategy Battle Game is the beginning of your journey in the world of collecting, painting and gaming with an entire range of Middle-earth™ miniatures based upon the amazing The Hobbit™ and The Lord of the Rings™ movie trilogies.

The Hobbit: An Unexpected Journey™ Strategy Battle Game allows you to collect all of your favourite Warriors, Heroes and creatures from the movies and pit them against your opponents in fun and exciting games of strategy and skill.

The rules of the game are straightforward and simple to learn; after just a few minutes you will be making your first moves, losing arrows, and engaging in a clash of swords and axes as you battle for glory across Middle-earth, from the plains outside the majestic gates of Erebor, to the rickety walkways of the foul Goblin-town, to the spider-infested forest of Mirkwood™. However, even after years of play and countless battles, there are still always new tricks and tactics to learn and unleash on the battlefield – the game really is easy to learn, but a challenge to master!

Each player takes control of a force of models that represent one of the many and varied races from across Middle-earth. This could be anything from a small band of Heroes such as the company of Thorin Oakenshield™, to a vast standing army such as the glittering host of Mirkwood Elves or the legion of Orcs and war beasts that lie under the command of Azog™ the Defiler. 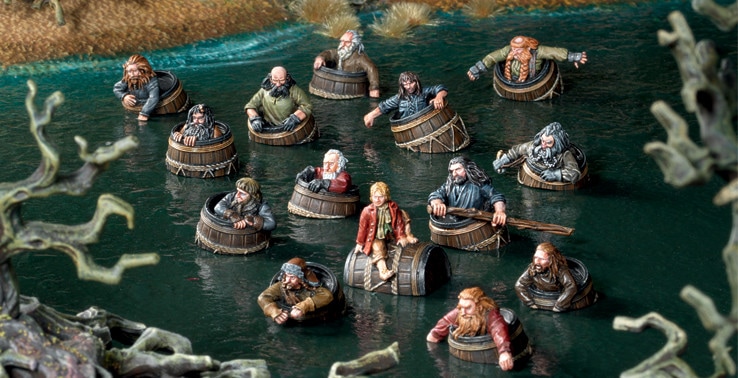 Where do I start?

By far the best place to start your foray into Middle-earth is with The Hobbit: An Unexpected Journey™ Escape From Goblin Town starter set. This boxed game includes everything that you need to begin collecting and gaming with Middle-earth miniatures. The set includes two forces, Thorin’s Company and the denizens of Goblin-town, a getting started manual to provide you with all of the rules that you will need to start, dice, a measuring stick, plastic scenery and more – everything you need to begin you own journey into Middle-earth!

From there you may wish to pick up The Hobbit: An Unexpected Journey™ rules manual. This whopping tome contains all of the rules that you will need to play your games, as well as the profiles for all the characters from the first film of The Hobbit™ movie trilogy and a series of scenario to help you recreate your favourite scenes from the film.

Also available is The Hobbit: Motion Picture Trilogy™ There and Back Again. This supplement to the main game picks up where the rules manual left of, following the journey of Thorin Oakenshield and his company of Dwarves as they continue on their intrepid quest to reclaim Erebor from the clutches of the Dragon Smaug™. This 152-page hardback manual contains all of the profiles for the Heroes and Warriors featured within both The Hobbit: The Desolation of Smaug™ and The Hobbit: The Battle of the Five Armies™, as well as a slew of Narrative Play scenarios to help you faithfully reenact the most iconic scenes from the films of the same name. There is also an in-depth campaign system that allows you to tie your games together and see how the results of one scenario will shape the future – what more could any Hobbit ask for!

The next thing you will need is a selection of your own miniatures to play your games with, and there are plenty to choose from here at games-workshop.com. From the ruthless Hunter Orcs that tirelessly pursued the company of Thorin Oakenshield, the humble fisher-folk that make up the Lake-town Militia, and even a rather mighty Dragon – there is something for everyone in our Middle-earth range.

Some parts of our range, such as the stalwart Iron Hills Dwarves, are housed over at forgeworld.co.uk, so be sure to keep checking both websites as new miniatures are constantly being added to both as the Middle-earth range continues to expand and grow! 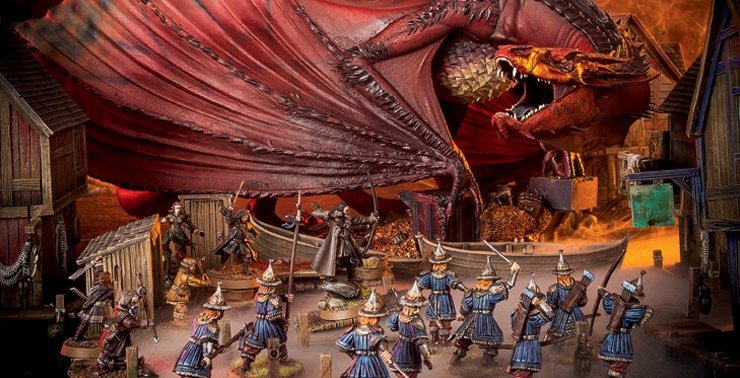 What about The Lord of the Rings™?

Since 2001, Games Workshop has continuously journeyed into the wonderful world of Middle-earth, starting out with the very first edition of the Strategy Battle Game based upon The Lord of the Rings: The Fellowship of the Ring™ and venturing forth ever since.

One of the great things about The Hobbit: An Unexpected Journey™ Strategy Battle Game is that it is completely compatible with The Lord of the Rings™ range of miniatures. This means that you can combine forces from both movie trilogies, or even pit them against each other to see who really was the best fighting force in Middle-earth.

You will find all of the rules for using the various heroes, villains and monsters of The Lord of the Rings™ contained within five Sourcebooks: The Kingdoms of Men, The Free Peoples, Mordor™, Moria™ & Angmar™ and The Fallen Realms.

Over the coming years, we fully plan to return to The Lord of the Rings™, so keep your eyes peeled for more great miniatures, supplements and rules manuals. 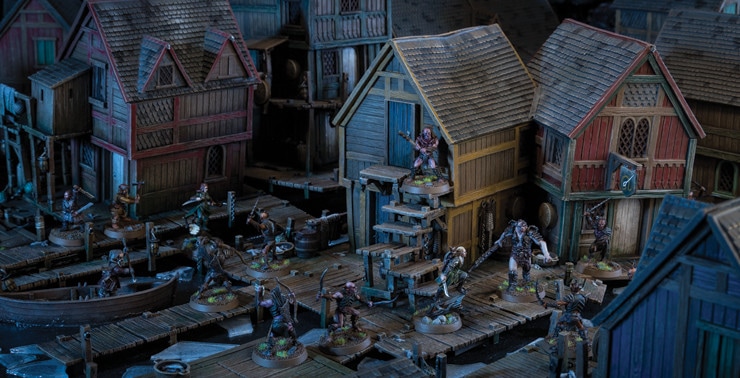 There are numerous different ways to play the Strategy Battle Game. From recreating the iconic scenes from the various movies, to creating your own battles based upon your own interpretation of Tolkien’s amazing world, the possibilities are endless.

Some players enjoy nothing better than recreating their favourite scenes, and the wide variety of Narrative Play scenarios presented in supplements such as The Hobbit: Motion Picture Trilogy™ There and Back Again provide an excellent way for players to do this.

Additionally, the Battle Companies rules manual provides a completely different way to play the Strategy Battle Game altogether – allowing you to create your own company of warriors and journey far and wide across Middle-earth as you battle other companies, progressing your own Battle Company further with each skirmish. The progression of each of your models allows for creating your own narrative whereby each model will become their own unique individual in their own right.

Other players enjoy the thrill of competition and pitting their armies against other like-minded individuals in a battle of wits and cunning, and therefore will test themselves in Matched Play games – whether at tournaments or gaming weekends (like Games Workshop’s own Throne of Skulls events), or within their own homes and gaming clubs.

All that is left really is for you to start your own journey into the wonderful world of Middle-earth. Will you command the free peoples of Middle-earth as they fight against the armies of the Dark Lord, or will you instead take control of the forces of Sauron as he bids to conquer the free lands and cast Middle-earth into shadow? The choice is yours! Middle-earth awaits…